The Toilet Transformation Has Begun… 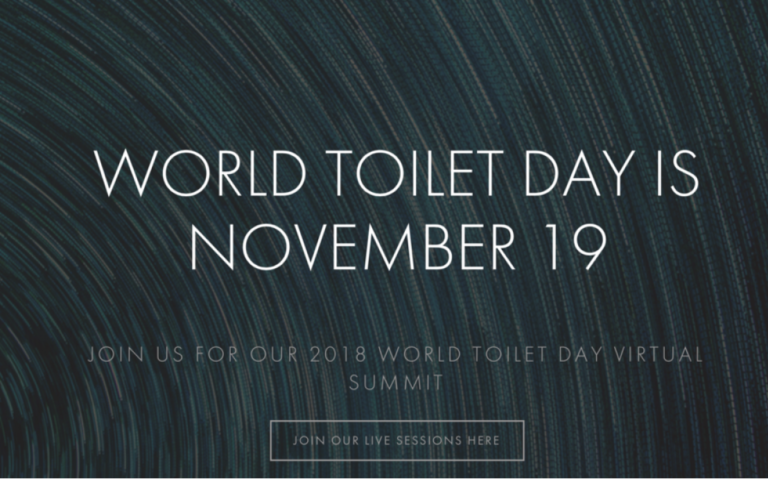 This World Toilet Day, if you are in the business of toilets or anything linked to the toilet as we are, 2018 has been a particularly extraordinary year.

But equally, if you use a toilet,  – as many of us do multiple times a day,  – we think that you are also going to want to know about the many surprising things happening to the world’s sanitation systems.

We are on the verge of a new type of Transformation – and it is very exciting.

There has been little change in our toilets and the systems that manage what goes into our toilets in the past 200 years. Meanwhile we are able to carry computers in our pockets in the form of a phone, we drive electric cars, and we can observe and monitor almost anything with satellites from space.

Why should toilets change anyway?

It shocks many to learn that in 2018, despite our astronomical progress as a civilisation, 2.3 billion people globally do not have access to a safe toilet and 4.5 billion, more than half of the world’s population, live amongst unsafely managed sewage and resulting contaminated water.

For decades poor or non-existent sanitation has kept billions of people in the cycles of poverty, in poor health, and has limited sustainable economic development for many countries. Over 500,000 people die unnecessarily each year from diarrhoeal diseases according to the World Health Organisation with children, women and girls disproportionately affected.

How can this happen? Because something as basic a human right as a toilet, and the systems needed to manage wastewater and sewage, are an unaffordable public cost for many governments. Earlier this year, UN Water released a report monitoring progress against United Nations global goal 6 to achieve universal access to safely managed water and sanitation by 2030. The report rang the alarm bell that “the world is not on track” (the name of the report) due to a lack of financing. There is a gap – a trillion dollar a year gap.

It is becoming clear to those trying to address this global crisis, that business as usual is no longer an option.

In 2014, a group of businesses came together because they saw a market opportunity in addressing this global crisis. In 2015, we created a business-led public private partnership to focus on business solutions for the sanitation crisis, the Toilet Board Coalition. In 2016, we launched the Toilet Accelerator program to support and scale businesses with new innovations, technologies, and new ideas about how to deliver sanitation through the market, and therefore relying less on governments.

Last year on World Toilet Day 2017 we launched our business vision for a multi billion dollar Sanitation Economy. We believe that this can transform sanitation systems of the future from being an unsustainable public cost into an untapped business opportunity. In addition to being good for society, many sectors stand to gain from this transformation, beyond toilets alone, to energy, water, agriculture, and preventative health.

The Sanitation Economy is changing the way we think about toilets.

The transformation lies in the way we value our toilets and the resources they capture. In fact, at the Toilet Board Coalition we don’t use the term ‘waste’. Instead, we say “toilet resources”.

When we started looking into sanitation for business opportunity we were really surprised with what we found in the places where most businesses had not been looking, such as:

–   Vast possibilities to digitise the system delivering new value from the data and insights captured, such as eco-efficiency and preventative health information – THE SMART SANITATION ECONOMY

Business can be part of the solution to ensure that we achieve SDG6. By bringing the expertise of the private sector, and joining forces with governments and the sanitation community, we can enable optimised models for sanitation systems that bring cost-recovery for governments and revenue generating opportunities for the private and commercial finance sectors. New business models are already showing the potential of recovering the costs of infrastructure for access to toilets and generating revenue from the capture and re-use of toilet resources, data and information.

Sanitation Economy companies that have been part of our 2018 Toilet Accelerator cohort have all doubled their revenues this year. Here are a few examples:

–   In the Toilet Economy, Ti Bus: Toilets for Her in Pune, India are transforming public toilets into an innovative, connected hygiene model designed for women. Unilever, Kimberly-Clark and Firmenich have provided mentorship support.

–   In the Circular Sanitation Economy, Biomass Controls and Tiger Toilets (both operating in India) are transforming large and costly municipal and community sewage treatment into low cost, easy to implement, mini-grids of biological resource streams that can be up-cycled to re-usable water, organic compost and renewable energy. USAID and LIXIL have provided mentorship support.

In 2018 we are very excited to showcase our progress and new evidence on how the Sanitation Economy can work at city scale and at sector scale. We are launching two new reports on World Toilet Day November 19:

A Smart Sanitation City expands the scope of a Smart City to include its sanitation systems. Sanitation can be included in Smart Cities’ architecture through data monitoring of public and community toilet usage, sewage treatment operations, infectious disease circulation and other health indicators.  It is the vision of the Smart Sanitation City that enhanced data collection will enable more efficient decision-making that will lead to cost savings for the city and revenue generating opportunities in partnership with the private sector.

We are partnering with the Pune Municipal Corporation and Pune Smart City with the European Space Agency and MIT providing technical support.

We have conducted this work in partnership with the Ethical Tea Partnership, Tata Global Beverages and Taylors.

Why do we think we are on the verge of transformation even though “the world is not on track”?

Recent events are starting to reveal the elements of a Tipping Point.

According to Malcolm Gladwell’s book, The Tipping Point, Gladwell states: “Ideas and products and messages and behaviours can spread like viruses do. The success of any kind of social epidemic is heavily dependent on the involvement of people with a particular and rare set of social gifts”

In 2011, Bill Gates announced his Foundation’s Reinvent the Toilet Challenge to generate and support new approaches for toilet technologies. In November 2018, he revealed several new technologies are ready for business and declared that we are on the cusp of a Sanitation Revolution.

In 2014, the Prime Minister Modi of India launched his flagship campaign, Swachh Bharat Mission and in October 2018 declared victory citing that rural sanitation coverage has reached 94% and around half a million villages are now open defecation free.

Matt Damon, Hollywood actor and co-founder of water.org and Akshay Kumar, star of 2017 Bollywood film Toilet: A Love Story have brought their star-power to the importance of toilets and sanitation.

In 2015, Xi Jinping, General Secretary of the Communist Party of China, announced a Toilet Revolution in China to improve the sanitary conditions for the 57 million households that have not had their own sanitary toilet. The Chinese government has set a target of 100%rural toilet coverage by 2030.

The stickiness factor is poop. It gets people’s attention – and no-one wants it let loose in their community.

The power of context is resource scarcity, the era of digitisation and the future of digital healthcare. The world is facing a 40% water gap, nutrient deficient agriculture and climate change. New sanitation systems could be a solution provider abundant with water, nutrients, the feedstock for renewable energy and a vast reservoir of information about human health and behaviour.

Investments made in the reinvention of sanitation systems are starting to pay off.

Solutions are now available – from technologies to business models and demand from the market. Businesses are taking bold actions. At the Toilet Board Coalition, we are particularly excited by new partnerships and new commitments from business leaders who are paving the way for new sanitation systems at scale.

This year our theme for World Toilet Day is Transformation via the Sanitation Economy. Join us for our Virtual Summit 19-21 November online – where private sector leaders will share their business solutions for SDG 6.2. www.sanitationeconomy.com.

Together, let’s accelerate the Sanitation Economy.

To join us in building the Sanitation Economy please contact: secretariat@toiletboard.org

The Toilet Board Coalition was founded by multi-national corporations Unilever, Kimberly-Clark, Firmenich and LIXIL Corporation in 2014 and since joined by the Tata group and Veolia. It formalised its operations in 2015 business-led public-private partnership, with 25 member organisations including leading businesses, governments and sanitation sector experts with the joint ambition to accelerate the Sanitation Economy.

Charlie Beevor is Vice President of Cleaning Brands at Unilever and the Chairman of the Toilet Board Coalition.