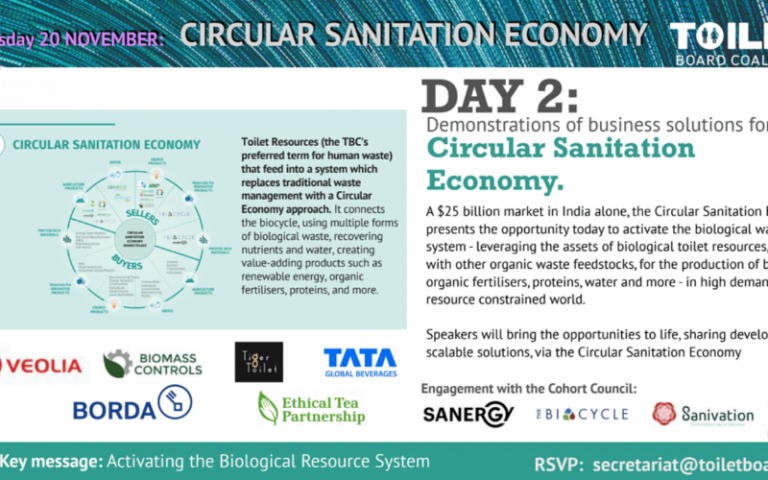 In the world of sanitation, already a place of huge initiative and progress, everything starts at the toilet. Human waste magically appears from human bodies, and is a problem to be solved, a substance with negative value because we pay to have it removed – just take it away, somewhere else. And the “somewhere else,” even if it’s a properly managed treatment plant, typically doesn’t recover anything useful like nutrients and renewable energy – so truly this is a waste.

In the world of the Circular Economy, also now a place of huge initiative and progress, there is intensive work going on to transform the “after use phase” of every kind of product… except food. This magically disappears into human bodies, and the experts look elsewhere to consider what happened to the packaging and the associated food waste, but not the food itself.

This is a classic blindspot! Two parallel universes separated by just a few metres of the human gut, but by a huge gulf of history, culture and mindset. A big factor is that developed countries long ago set up sewer and treatment systems, but in developing countries 4.5 billion (more than half the world’s population) don’t have that luxury. Perhaps instead they now have a leapfrog opportunity?

As one of the Toilet Board Coalition’s network of sanitation entrepreneurs put it, all biological waste is “second hand tomatoes” irrespective of whether it comes from a farm, market, kitchen or toilet. All of it needs some proper care to deal with smell, pathogens, and other contaminants. But it carries nature’s uniquely flexible design trick which means that in nature there is actually no waste at all – it’s all the same stuff. A lion, a lemon, and a Londoner are engineered differently, but they use the same molecules – for their bodies and even their faeces.

In the poorest countries, according to UNEP statistics, more than half the waste is biological, and more than half the biological waste is “human waste.” So if we’re going to think of the circular economy, or of sanitation, let’s start here. Build holistic biological waste systems, recovering nutrients and energy, and use them to create more affordable services, including affordable sanitation. And with all this value available, let’s start thinking about “Toilet Resources” and drop the misleading word waste.

Even better, if we use these systems to the full, they could handle other compostable materials. There are numerous products which in their intended use get mixed up with biological materials – food packaging, nappies, wipes, sanitary products. Most today are made of plastic and create a serious waste problem. They’re actually the hardest part of the huge plastics waste problem – small dirty items which hardly ever get recycled. Made of compostable materials they could all go into a holistic biological system… if we had one.

The emerging evidence is that this approach – which we call the Circular Sanitation Economy – can work economically, with a range of profitable business models dramatically reducing the cost of waste infrastructure to cities and citizens. And of course it’s good for the environment, with not only waste and water improvements but also multiple reductions in carbon emissions. And providing sanitation remains the biggest preventative health opportunity on the planet. So, if we can eliminate our blindspot, there is a triple bottom line benefit.

Join us on 20th November for the second day of the Toilet Board Coalition’s World Toilet Day Virtual Summit – three webinars on the Circular Sanitation Economy – opening our eyes to the blindspot! Details on sanitationeconomy.com

– Sandy Rodger, COO of the Toilet Board Coalition