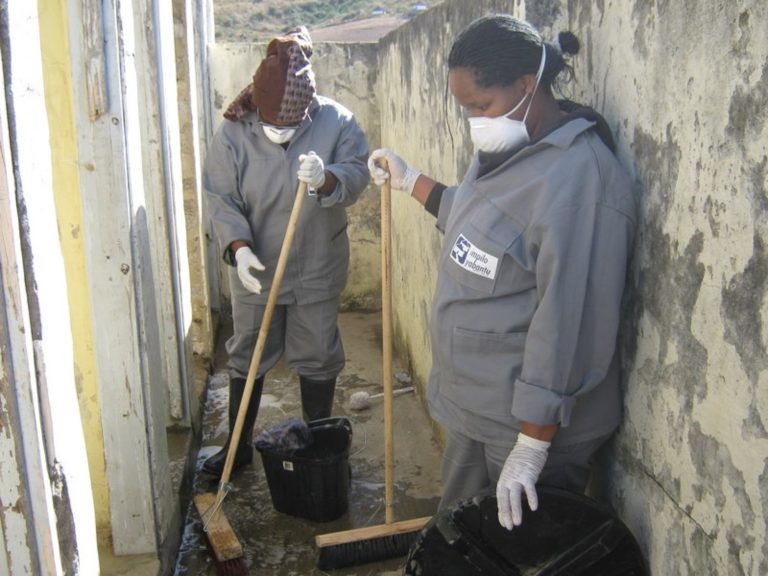 Historical inequities have resulted in large parts of the South African population having inadequate access to sanitation facilities and services.  South Africa’s vision 2030 goal is to provide universal access to piped water and access to hygienic toilets and thereby contributing to healthy population and environment which will ultimately lead to a stronger economy. South Africa has acted purposefully to attain this goal through government sponsored programmes which aimed to provide basic sanitation services to all, including poor and unserved communities. Our national percentage of households with access to improved sanitation facilities from 62% in 2002 to 80% in 2015 reaffirming Government’s commitment to provide access to this basic human right. This journey has not been easy and we continue to have technical challenges. Though significant progress has been made since the democratic dispensation from 1994, many new challenges have emerged with a growing aspiration for better solutions. The binary model, of gold standard in form of full flush toilet vs hole standard in the form of pit latrines, for rich and poor areas respectively has not closed the gap, but reared a myriad of new operational challenges.  Compounding this is the fact that South Africa is a water scarce country and the universal access to waterborne sanitation may not be realised due to the prohibitive costs and the availability of water.  The deeper problem is that there is no sanitation market, especially for the poor – it happens to be a monopolised public good with minimal innovation uptake.

So, South Africa has decided to fix two new sanitation markets – first to improve services to many who are already on off-grid basic sanitation through improved service offerings, and secondly to stimulate a whole new market of new and innovative off-grid/non-sewered sanitation technologies.  Our sanitation challenge in South Africa is a continuous one.  I do not see the current norms in sanitation technology in the form of flush toilets sustaining in the future in terms of both water and sanitation security.  It was at the National Sanitation Summit in 2015, hosted by the Department of Water and Sanitation, where the then Deputy President – Cyril Ramaphosa issued a clarion call “it’s not all about flushing”.

So let me share with you progress on how South Africa aims in transforming the sanitation environment towards a smart sanitation technology solutions environment which will see sanitation going off the grid, and associated with this a new sanitation services market. To achieve all of this at the scale it is envisaged that smarter management systems and user behaviour change will be necessary.  This approach offers endless opportunities for stimulating the development of a new industry which will potentially meet several national objectives of job creation, SMME development, micro and macro enterprise development etc. while turning this challenge into an opportunity towards a circular economy for sanitation.

The circular economy of sanitation sees human wastes as resource, which allows a whole ecosytem  of beneficiation to be derived from processing, by-products and servicing models which support self-sustaining businesses.  It has a catalytic effect of stimulating and developing a series and variety of logistics and supply chain models which brings greater convenience to the user/customer and the much needed capacity which is a weakness in the public model.  We already seeing many of these initiatives, where human wastes are being turned into valuable products such as biochar, oil, protein and fertilisers. This resource approach opens up these new opportunities for a sanitation economy.

In fixing this new market, Government will have to play the leadership role, a role of the enabler and the role facilitator.  It is also about transforming a very entrenched public supply model which will have to evolve if we are to be successful.  The following is already in progress:

– POLICY – In our new DWS policy positions and in the National Sanitation White paper  the notion of this new sanitation transformative environment has been entrenched.  This formally sets Government impetus and commitment in this direction.

– INDUSTRY – The DTI, DST and WRC we have established an industrial platform for new off grid sanitation in a DTI policy of 2017.  This is a strong signal that for us to transform the sanitation space, we should have a strong industrial and innovation base for solutions and production.  Localisation and manufacturing also stimulates and creates a new industry with products and services and meaningfully many new jobs.

– STANDARDS – Working with our SABS we in the process of adopting the ISO 30500 Standards on non-sewered sanitation.  These are very important elements in this new sanitation economy. Products and innovations must subscribe to national standards and quality.

– REGULATIONS – The DWS is working on new regulations, however one of the key instruments undergoing revisions is the National Building Regulations to include the new off grid sanitation solutions. This adds the stimulus for both the state and the public institutions to ensure quick uptake of solutions.

– DEMONSTRATION – In his recent speeches in response to challenges to school sanitation, the President highlighted and recommended the introduction of new solutions to the school system.

All of this to date is a bold and ambitious attempt in transforming South Africa’s sanitation future and hopefully that many cities around the world.  I believe that this will be the new gold standard in the future which will have universal access to sanitation.   Further the net benefit will also be the saving of nearly 50% freshwater and the elimination of pollutant pathways to that of beneficial biproducts.  This transformation will fix a new market for sanitation and meet several of the SDG goals.

– Jay Bhagwan, Executive Manager of Water Use and Waste Management at the Water Research Commission and Partnership Council Member of the Toilet Board Coalition