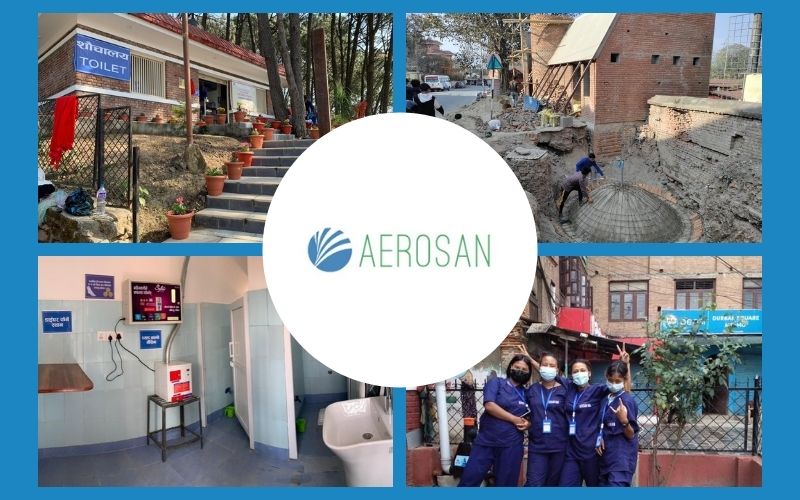 Aerosan taps into the power of PPPs (Public-Private-Partnerships) to deploy safe public toilets in Nepal.

Headquartered in Halifax, Canada, Aerosan runs a sanitation business in Nepal (Aerosan Sustainable Sanitation), providing sustainable sanitation solutions to the world’s most vulnerable populations, in the form of safe public toilets in densely populated urban areas with little or no sewerage.

In addition, Aerosan’s hubs feature a shop selling potable water, masks, sanitary and cleaning supplies as well as a tea house/café which utilises the biogas produced. These are managed by minority Dalit women (formerly untouchables) part of a Sanitation Workers Co-op. The company trains them in their evidence-based cleaning protocol and in operational management of the HUBs, provides uniforms, mobile phones and full PPE (personal protective equipment).

After successfully running five of these “toilet Hubs” in Kathmandu, the company recently entered a Public Private Partnership (PPP) with both Kathmandu and Lalitpur Metro Cities, the largest municipalities in Nepal. This PPP contract commits the municipalities and wards to providing the land, the outer building shell and a 10 year, rent-free operating license for Aerosan to install 60 more toilet hubs.

This PPP agreement gives great hopes to Aerosan that it is possible to provide more toilets to the population and to replicate this model to other locations.

In fact, the company is now planning to expand it operations to other countries, hoping that local municipalities will see the value of investing in their models to unlock more public toilets.

The Toilet Board Coalition strengthens its leadership

Aerosan taps into the power of PPPs (Public-Private-Partnerships) to deploy safe public toilets in Nepal.

Aqua for All joins the Toilet Board Coalition